I've found you've got to look back at the old things and see them in a new light. (John Coltrane, Downbeat, 1960)

Two days ago, I began looking at a diagram that John Coltrane drew and gave to Yusef Lateef. In looking at the diagram, I attempted to discard any prior "knowledge" or learning that exists for Coltrane's work, and just derive the meaning of the diagram from what is actually in the diagram itself. From this derivation, we can then connect the dots with what Coltrane played and think about his intention.

I got lots of responses to this on Facebook—with the saxophonist Ed Jones having lots of great information and insight. He wondered if Coltrane drew the chart before or after he'd read Nicolas Slominksy's Thesaurus of scales and musical patterns. Ed goes on, also providing a possible answer to a question I asked last month. All the emphases are my doing:

As to when Giant Steps was written I've read that he was working on it five years before he recorded it... that might or might not be true.

Benny Golson and Trane had the same teacher, Dennis Sandole, who also taught many others significantly Michael Brecker and Matthew Shipp.

If you look at the chart and the derived cycles and check how the voice leading works for all of the alternative subs or super-impositions (for me I prefer the term multiplicities), for example over C7 (E7 A♭7) leading to Fmaj, they produce distinct colours and melodic contours.

Which is why I have a problem with the term superimposition. It's possible to play through the cycle without really being concious of its voice leading implications: then it is a superimposition {but} I don't think Trane heard it like that. I think he heard it as part of a continuum that offered alternative sets of melodic possibilities through the harmony. [...] as a side note Benny Golson's composition Stablemates uses similar harmonic strategies to those found in Moment's Notice (chromatic ii-v's ) half step below and above the next bar... Golson must have written this prior to Coltrane joining miles in '55 as it was Trane who introduced miles to the composition... hence its inclusion in the Prestige sessions...

The senses of continuum and multiplicities are evident in the diagram. Here it is again:

And here is a picture taken by Dan Johnson of the "correction" from the same book:

Looking at the diagram again, you notice how Coltrane repeats the whole tone scales to connect the "main" pitches? For example, in the outer ring the main pitches are C, B♭, A♭, F♯, E, D, going clockwise. Each of these main pitches is connected by the reversed sequence of the same notes [so D, E, F♯, A♭, B♭, C]. The repetition of pitches gives a sense of self-similarity, which Cleveland Watkiss alluded to.

The "reversed sequence" [which is an ascending whole tone scale] is repeated five times within the diagram, and in the context of the circle this repetition forms a cycle.

The visual pattern maker Sarah Knight looked at it and clearly stated that she'd define a "grid" first, dividing the sections into the relevant equal parts. Sarah picked up on the star that highlights the five C's as the grid, which if you look at it from the perspective of the circle of fourths/fifths, is unexpected: but from a perspective of repeated whole tone scales actually makes a lot of sense [but would this be harder to draw?]. To Sarah, the anomaly in the pattern that I pointed out looked like a mistake; and according to the second picture, I now think it is.

Arun Ghosh came up with a great explanation of the "mistake", and drew a connection with Coltrane's spirituality:

I think Coltrane was using these mathematical principles to find truth; he was using geometry to create a musical system that connected with The Divine. A system that, due to its mathematical generation, was of The Divine and from The Divine. This feels quite Islamic to me, which makes a lot of sense, considering where Coltrane was at, and where he was going. For me, this also explains the "mistake"; in keeping with Islamic design, art and architecture, this has been added as a sign of respect, as only Allah is perfect.

But what Sarah also noticed was that the handwriting of the innermost numbers, the numbers marking out the C's and the note encircling lines and the inner encircled notes looks different to that of the main and subsidiary pitches. I had totally missed this. It's possible then that Lateef annotated this diagram after he received it. Lateef was exploring Islamic-based spirituality before Coltrane and fits in with Arun's idea very well.

I made some attempts yesterday at unwrapping the circle and dividing it into five sections; but I'm not finished with this yet. I do have another idea, which I think I'll do now and post in the comments when it's done. But it's thoroughly enlightening to examine this drawing in new ways.

This is the presentation of that other idea I spoke about.

Have you ever seen one of these before? It's on my desk. 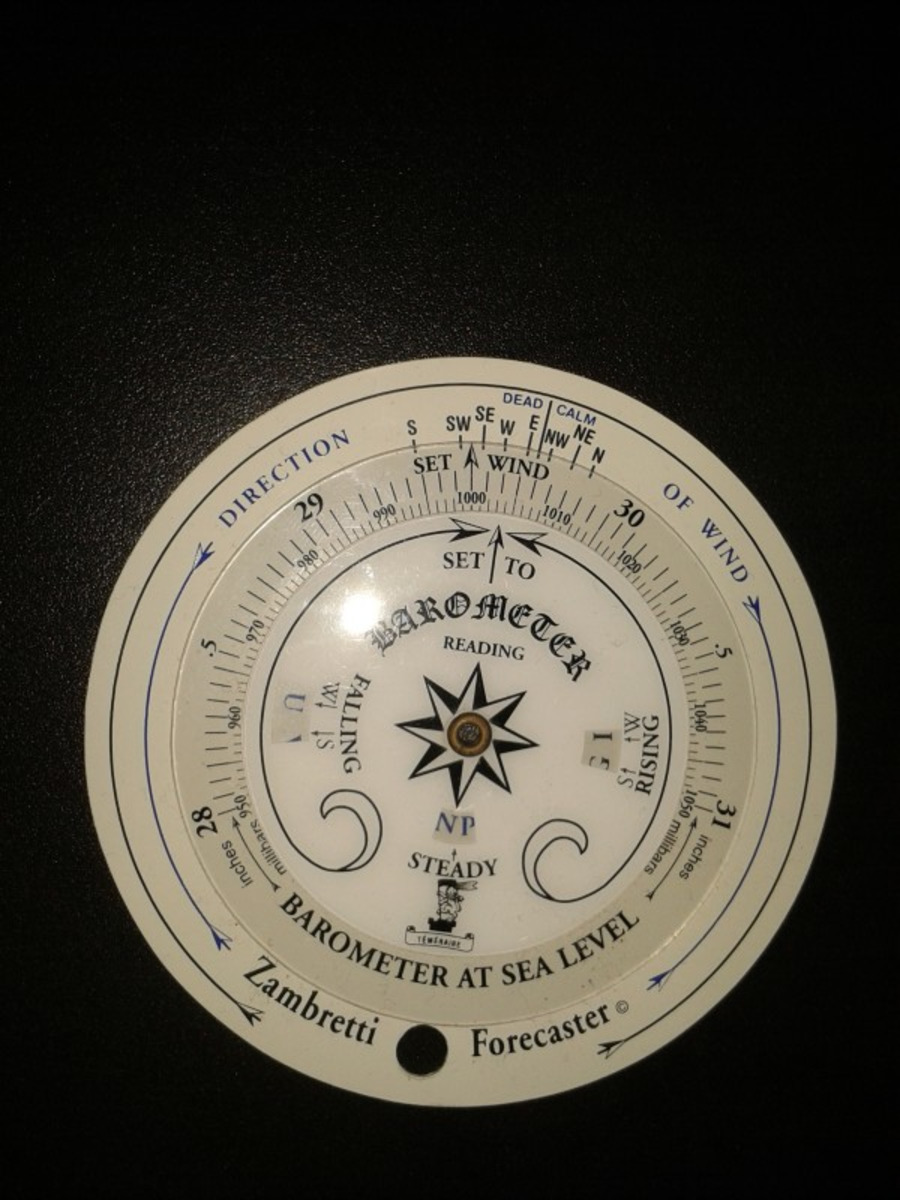 It's a weather forecaster. To make it work, you deduce the direction of wind, get an atmospheric pressure reading and turn the discs accordingly; it then gives you two options as to how the weather might be depending on whether the pressure is falling or rising.

This gave me the idea of making this. 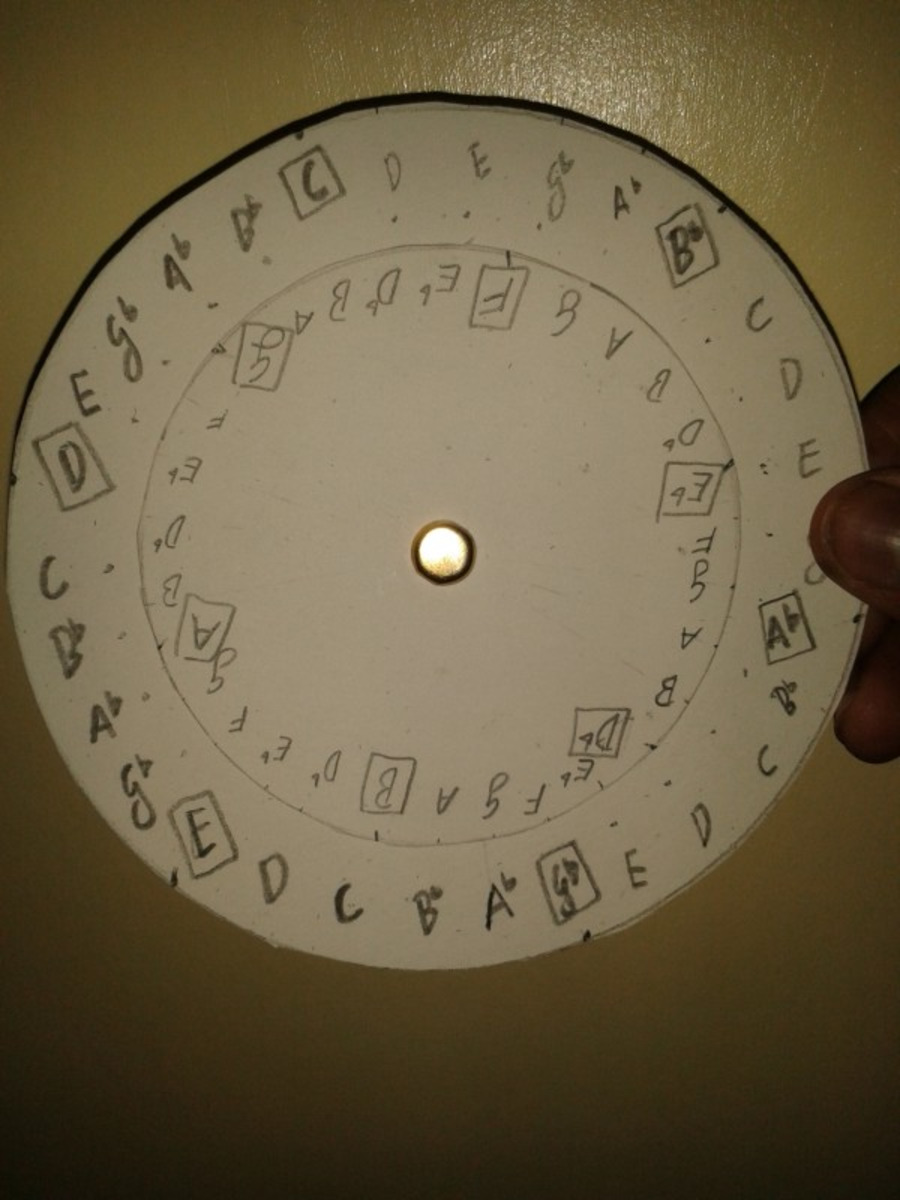 As you can see, it's quite rough and ready. But it gives another way of seeing the original diagram. In the above picture, I hope you can see that the inner disc is spun to match the layout of the diagram.

Being able to turn the inner disc means you can examine different multiplicities. Below, I've set the modeller to match a Satellite alteration. 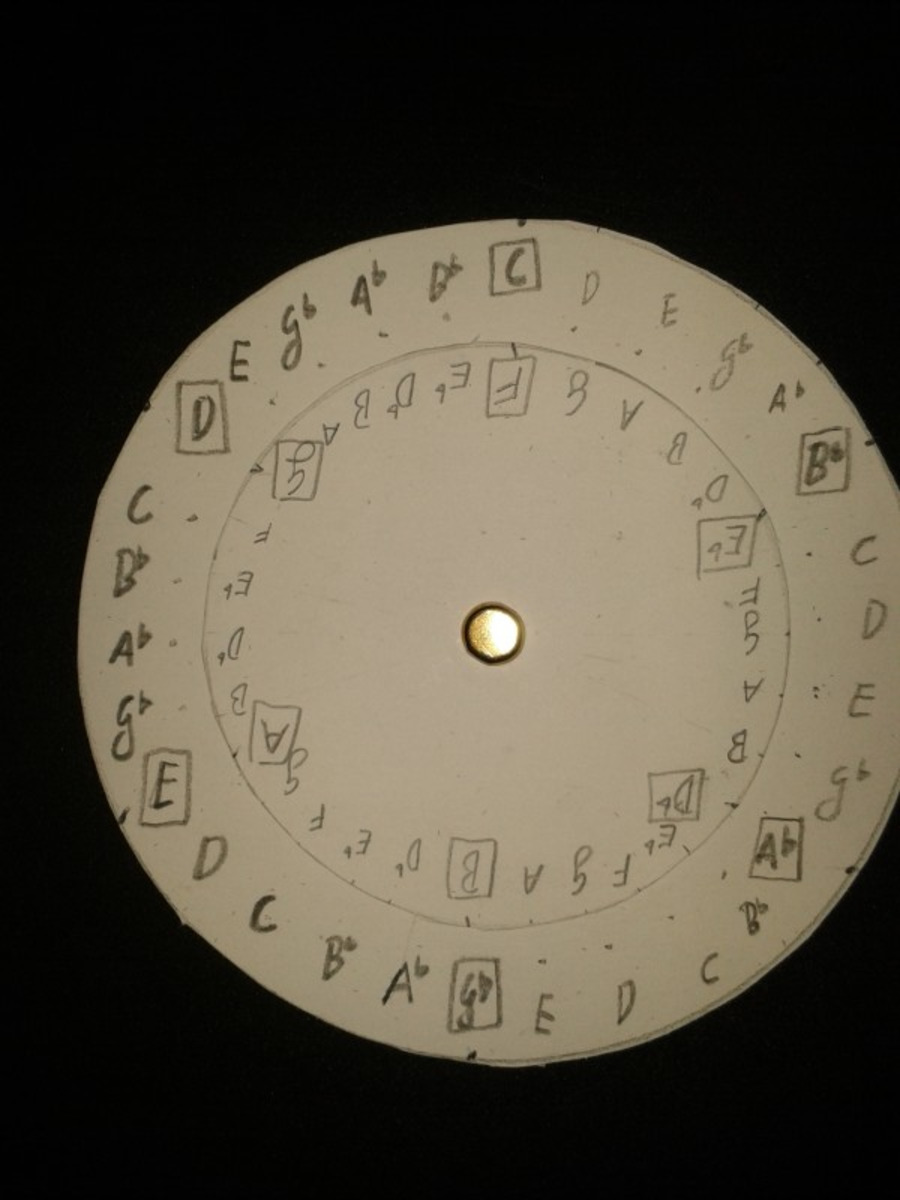 Transforming the diagram into a three-dimensional object is not necessarily what Coltrane did or meant. We currently have no way of knowing if he saw the system as non-static: this is where I have taken a "leap of logical faith". I believe that the diagram is only one of several workings out that Coltrane may have sketched. From what he said in his Downbeat article, Coltrane was working on stacking chords. But he was still experimenting: so logically, it follows that he modelled these possibilities in many ways with pen and paper. The original diagram is not necessarily the totality of his system of the time.

Here's a slightly improved model, with the pitches written radially. 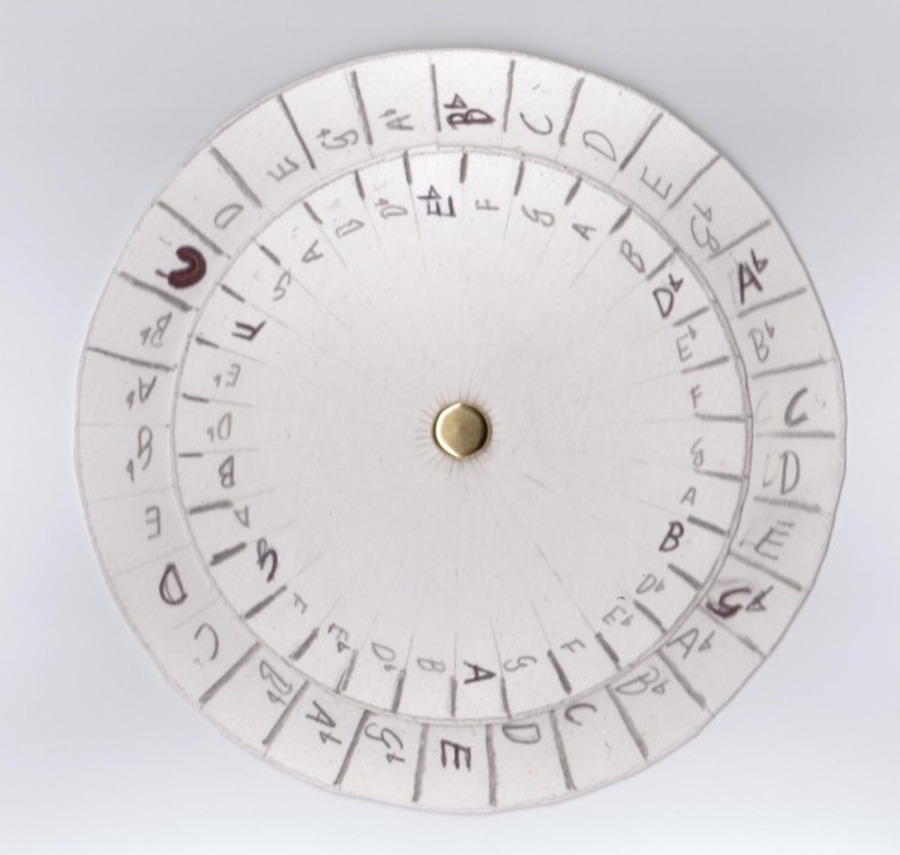 With the layout above, part of the sequence of Central Park West appears. But I suspect this is actually a coincidence rather than a design.

I forgot to say how to make it! You'll need:

Draw two circles on the card, one bigger than the other. Use the protractor to mark every 12 degrees around the circumference of each circle [or use the compass, if you know how and have time]. Then draw diameter lines through the circle from each mark. This will give you thirty segments.

Cut the circles out and pierce the smaller circle through its centre with the split pin. Then pierce the larger circle.

Hello Corey. This is brilliant. I'm going to make one! Years ago I made "musician controllers" for audience members. They were A4 card with three semicircular dials (sort of like the engine room telegraphs on ships). One was "Loud–Soft", next "High–Low", then "Normal–Weird". (These were the three main elements of music to my mind.) The controllers were good fun, but we had to give them up because a female audient nearly killed Raymond MacDonald one night by wiggling the dials back and forward extremely fast... To get to the current point though: Bill Wells and John Longbotham (who know a lot more about this stuff than me) used to speculate that the middle eight of "Have You Met Miss Jones" seems to have the germ of the Giant Steps movement. I just had a look at it in Alec Wilder's "American Popular Song" and it makes a kind of sense if you replace Rodgers's dreamy 6ths and 7ths with II-V-I's... Did Coltrane ever play this song? It's the right vintage for him... This is a really intriguing line of thought you've raised. The mystical/numerological ideas are fascinating... All the best! George

Happy New Year George, and thank you very much! I don't know if Coltrane did play the song—there's a rumour that it inspired him, but I don't think it's any more than that. I tried looking for a version that was recorded in the 1940s and found this:

Hi Corey, maybe the best way to understand the Coltrane circle is to actually play a whole-tone tuned instrument. Nothing has enriched my musical life as much as this discovery. http://www.tuutflutes.com/en/intro.php

I have written a third part to this.